SurveyKit is the only software designed specifically for party wall Schedule of Condition reports.

In this blog post I will explain how this new project was born and talk a bit about the problems that SurveyKit is solving.

How did it all begin?

Back in the early days of Party Wall PRO we were working with Party Wall Surveyors to understand the biggest problems and frustrations in their day-to-day work. Our ultimate goal was to see if we could develop some technology solutions to make their life better. One theme that kept coming up in conversations with our users was the pain of carrying out a Schedule of Condition with “low tech” tools (pen and paper, cameras, recording devices, home made templates).

We kept hearing about this (it even came up in one of our podcast episodes with Nicky Major) and we took note..

At the same time though, Party Wall PRO was growing fast and we were playing catch-up with user on-boarding, customer support and developing new features.

In the fall of 2018 a new talented software engineer joined our team and we finally were able to look into new projects. The new schedule of condition app idea was on our customers’ “most wanted” list so we decided to give it a go.

First thing we did was a bit of research to find out what was already available on the market. We found a plethora of solutions that ranged from free/cheap generic apps with poor customer experience to very pricey enterprise level solutions that charged thousands of pounds per user per year. We were really struggling to find something in the middle of these two extremes: a quality solution, suitable for schedule of condition reports without compromises, affordable to the average surveyor.

We also went out and surveyed some Party Wall Surveyors in our network to see what they were using currently and gather more specific information. Here are some of the most interesting findings: 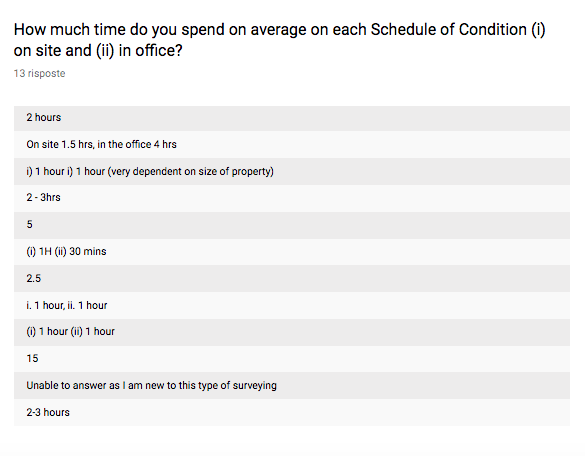 The average time spent on a Schedule of Condition, including editing and generating the report turned out to be around 2.5 hours. 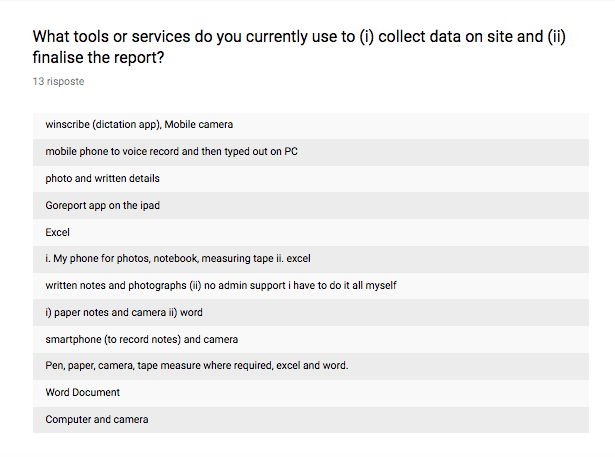 All people surveyed were using different methods to collect data on site. Paper notes were quite common, typically a phone or a camera were used for photographs, some people recorded audio notes and transcribed manually later, only one said they are using an app on iPad. 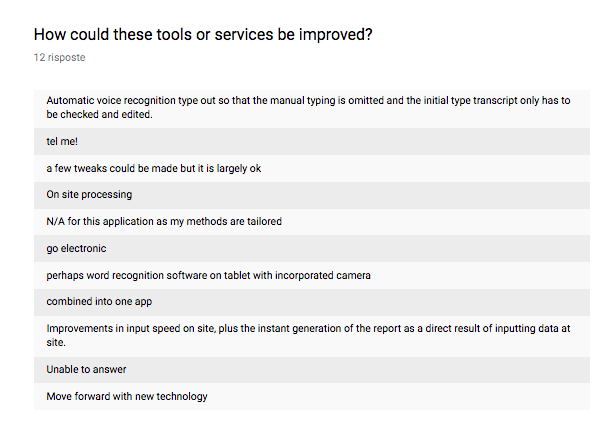 Voice recognition came up as a theme, as well as faster processing and on site generation. 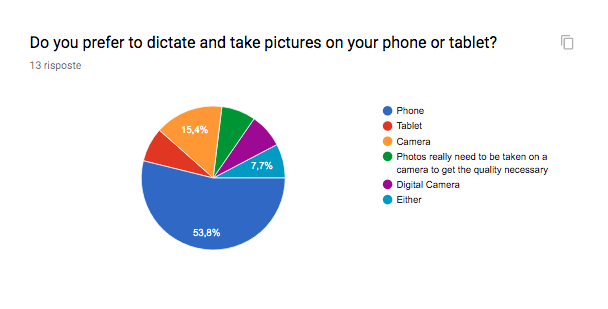 More than 50% of people said they would prefer to do everything with their phones.

What these answers told us was that there was appetite for a new solution that would fill the void between the low quality generic apps on the app stores and the more tailored “thousands of pounds per year, multi-year contracts” apps on the higher end of the market. This new app would be affordable, customisable to some extent, work on people’s smartphones and would initially be designed with Party Wall surveyors in mind in order to reduce the time and effort required to produce a Schedule of Condition report for their Party Wall jobs.

So we went back to work and within a few months we came up with a initial prototype of a mobile app that would run on Android and iPhone devices. The mobile app would let users create condition items for the properties they surveyed, add photographs, text and audio recordings to these items. All this could be done within the app without having to switch back and forth between multiple apps and tools.

We showed the prototype to a few people, included some of our long term most trusted Party Wall PRO users and got some initial feedback. We took all the comments on board and went back and improved the app, built a companion website for users to be able to visualise and edit everything they collected on site. We worked on the audio transcription function to make it as accurate and reliable as possible.

We started inviting some early adopters to the app. These were people who told us were interested in trying it and joined the launch email list. They got priority obviously and they received access to SurveyKit before we even decided the date of our public launch.

Again, feedback for early adopters was very positive which gave us the confidence to pick a date for our official launch: the 23rd of September 2019.

After going through our “launch checklist” the night between the 22nd and the 23rd of September I got a bit emotional: after all the hard work and energy we put into this new project, it was time to show it to the world..

We believe we built something really good and people are telling us how much better they feel using SurveyKit in comparison to other apps they’ve tried in the past.

But this is not the end of the journey, a new chapter is just starting now. We are committed to improve SurveyKit and make it more slick and user friendly in all its parts. Our goal is to add another essential tool to the Party Wall Surveyor’s toolbox; something that can save them time and money, add massive value to their businesses. We want to cut the time spent on Schedule of Condition reports by 80%.

We want SurveyKit to be a tool our users will be proud of.

If you want to check out SurveyKit, you can get started very easily with as little as 20 credits. Each credit will let you create a Schedule of Condition project and generate a report. You will receive all updates and improvements seamlessly.

You can head over to www.surveykit.io where you’ll find directions on how to download and install the app on your phone. You will be able to access the web portal with the same credentials that you choose on registration.

If you have any questions about SurveyKit you can send them to us at info@surveykit.io

If you are looking for our software solution for Party Wall Surveyors head over to our main site at: www.partywallpro.com